Statblock5e provides an easy way to display a creature statblock that looks almost exactly like the statblocks from the 5th edition D&D Monster Manual. 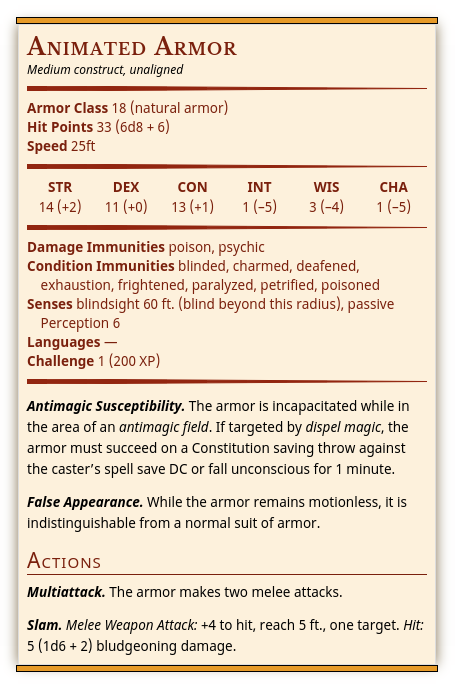 This is implemented as a set of custom elements following the Web Components specs: ES Modules, Custom Elements, and the Shadow DOM.

While statblock5e has been tested the most in Chrome, it may also work in any browser that properly implements the Web Components v1 specs. Make sure you are using at least Chrome 61 or Firefox 63.

There are no dependencies (JavaScript or otherwise), this is entirely self-contained.

There's very little JavaScript actually; just a bit of boilerplate that defines the custom elements and some minor logic for computing the ability modifiers for the ability table. Other than that, it's pure HTML, CSS & SVG.

Here's the markup that produced the above picture. No user-level CSS or JavaScript is necessary.

The example text is copyright Wizards of the Coast; they make it available for free on their website through the D&D 5E Basic Rules (it's in the DM supplement).

Visual differences from the MM statblocks

Unfortunately this statblock isn't quite pixel-perfect with regards to the statblocks in the MM. The differences are:

There are probably other differences as well but I haven't noticed them. I tried to stick as close to the original as reasonably possible; for instance, I spent waaay too much time getting the drop-shadow to be the "correct" shade of brown and the tapered horizontal rule to render just right. Why? Because I had nothing better to do and it was fun! :)

Is there a single-file version?

The demo.html file in the repository HTML-imports the other HTML source files. There's also demo-inlined.html which renders exactly the same but has all the HTML-imports inlined directly into the document.

The Python script that produces the inlined version is also available.

How do I make two-column layouts?

See the demo-two-column.html file (here's a rendered image). The key thing to notice is the use of the data-two-column attribute on the <stat-block> element. You can also use the data-content-height attribute to tweak the layout. See the comments in the demo file for details.

Why aren't you using polyfills?

While polyfills for Web Components do exist, they're not perfect and require a preprocessing stage that inlines all HTML imports and rewrites the new CSS selectors like :host, ::content, /deep/ etc. There's no easy way to tie all this together and frankly, I don't care enough since I'll personally only use this for locally hosted pages rendered in Chrome.

If someone wants to do the required work to implement the whole preprocessing pipeline, pull requests are welcome.

This software is licensed under the Apache License, Version 2.0.